Based upon one of the most popular books by Cormac McCarthy ‘All the pretty horses’ tells the story of three young men (Matt Damon, Henry Thomas, and Lucas Black) in the 1940’s who after hearing all the tales of cowboying in Texas leave their home to cross the border and work on a ranch in Mexico.

The youngest of the three youths, played by Lucas Black, is only 13 years old and is separated from them soon after they enter Mexico.  The two young men hire on with a wealthy rancher ( Ruben Blades), and Matt Damon proves his worth by breaking the wild horses he owns.  He also romances the rancher’s daughter (Penélope Cruz) much to the ire of her father.  He throws them in jail, where they meet up with their thirteen year old companion who has killed a man.

This is what I would call a ‘New Western’ it has the elements of what a classic western contains but with a more modern feel.  There is a slight distopian feel to this movie a despair at a loss for the way of life that can’t be brought back.

I do like this movie even if it does evoke a schadenfreude feeling in me and I am giving it three stars out of five.

Shout out to W W Sorrells for suggesting this movie to me.

Baptism is the washing with water in the name of the Father, the Son, and the Holy Spirit; it signifies and seals our adoption into Christ, our cleansing from sin, and our commitment to belong to the Lord and to his church.

Go therefore and make disciples of all nations, baptizing them in the name of the Father and of the Son and of the Holy Spiri

Buckle up it’s going to be a bumpy ride.  More like a roller coaster actually.

Oh where to start, where to start.  How about breakfast?  It is the most important meal of the day.  Well unless you’re Kellogg’s Corn Pops then well then you are racist, at least your art on your cereal box is.

I am of two minds regarding this.  First  in the sea of yellow characters why did the artist have just one brown character?   And why a janitorial job?  But my other thought is am I reading too much into the back of cereal box?  Must we look for the hidden agenda everywhere?

Oh and while we are on this subject here is a helpful flow chart supplied by  1870 Magazine to help you decided if your Halloween Costume is racist.

Personally I am staying home and reading a book.

And now in barking mad news: 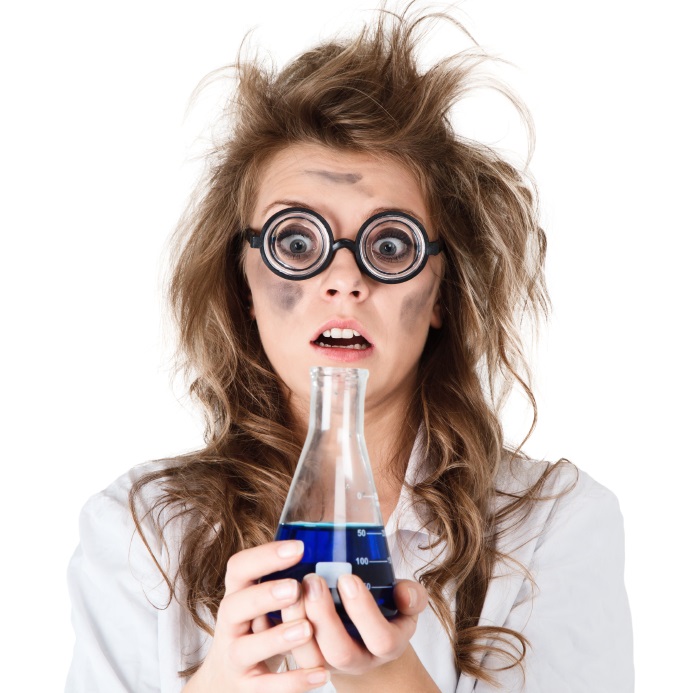 From the website of Campus Reform comes the story of a feminist professor by the name of Sara Giordano who claims that “traditional science” relies on “a colonial and racialized form of power,” and must be replaced with an “anti-science, antiracist, feminist approach to knowledge production.”  No I am not making this up click the link.  Of course my thought is that good luck on getting your computer fixed with that”anti-science, antiracist, feminist approach to knowledge production.”

From the U.K.’s Independent: Scientists can’t figure out why the universe exists at all.  According to the current model in the beginning there would have been equal amounts of matter and anti-matter which should have annihilated each other completely leaving no matter at all. Christian Smorra, the author of a new study conducted at CERN said this:

All of our observations find a complete symmetry between matter and antimatter, which is why the universe should not actually exist. An asymmetry must exist here somewhere but we simply do not understand where the difference is. What is the source of the symmetry break?

The latest possibility was matter and anti-matter’s different magnetism. But new research shows that they are identical in that way too – lending further mystery to the question of why the universe is still around at all.

My answer to this is:

Do you remember Sophia the robot that wants to destroy humans?

Now comes information from Saudi Arabia that Sophia has been given citizenship. however unlike other “females” that live in Saudi Arabia she won’t have to wear a burka, maybe. And it is unclear what citizenship will mean for robots in Saudi Arabia. Of course under Saudi law females can’t make important decisions unless given permission by their male guardians. Which should give humanity some breathing room.

And that is it for Frenetic Friday.

But there are many interpretations

Over the years, when I bring God’s Word into my conversations with others, I have often heard: “But there are so many different interpretations of the Bible. How do you know that yours is the one that is true? Isn’t it arrogant to believe that your interpretation is the only true one?” Because I know that many people have asked these questions or have wrestled with the many interpretations of Scripture out there, here is my response:

Scripture is God’s Revelation to Us

We must begin by answering the question: What is Scripture? There are really only two possible answers to this question. One way is to recognize the Bible as God’s words to mankind. So our Creator and Lord has revealed Himself and His will to us in the pages of Scripture through human authors. Now if God has sought to communicate to us, then why would we think that He cannot speak to us clearly so that we will understand His revelation to us? When our God speaks, He speaks to be understood. God has created us in His image to receive His revelation so that we can know what He wants us to know. Therefore, we have every confidence in knowing that we can understand what God has revealed when we interpret His Word.  (Continue here)

Since we are so close to the 500th anniversary of the Reformation it seemed appropriate to have this for Earworm Wednesday.

Plot:  Poor Mortimer Brewster, (Cary Grant), all he wants to do is marry the love of his life, (Priscilla Lane) and take her to Niagara Falls for their honeymoon when he finds out the secret that his aunts (Josephine Hull, Jean Adair) have been keeping in the basement.  Seems the aunts have taken it upon themselves to reduce the population of older lonely men in town the upshot being there are twelve graves in the basement of their house.

Throw into this mix the aunt’s brother, who thinks he is Teddy Roosevelt, and insists on blowing a bugle as he runs up the stairs yelling “Charge!” And Mortimer’s psychopathic brother, Jonathan, (Raymond Massey) whose brought his own personal plastic surgeon with him. Dr. Einstein, (Peter Lorre) a neurotic quack who can only operate while intoxicated.  How Mortimer survives this menagerie and learns the best news of his life is what makes this film one of my fifty must watch movies.

Frank Capra’s dark comedy is truly one of the best examples of the genre and rarely matched by similar movies labelled as such.  Cary Grant is perfect as the much put upon Mortimer.  Josephine Hull and Jean Adair play the sweet deadly old ladies to the tee, having that “surprised by all the fuss” look upon themselves most of the time.  Raymond Massey’s performance is on par with Grant’s playing the cold craziness that he does so we’ll.  All in all a great movie with just the right touch of sinister to make this the perfect movie for a Halloween movie night.

This gets five stars out of five.

What are the sacraments or ordinances?

The sacraments or ordinances given by God and instituted by Christ, namely baptism and the Lord’s Supper, are visible signs and seals that we are bound together as a community of faith by his death and resurrection. By our use of them the Holy Spirit more fully declares and seals the promises of the gospel to us.

We were buried therefore with him by baptism into death, in order that, just as Christ was raised from the dead by the glory of the Father, we too might walk in newness of life.

And he took bread, and when he had given thanks, he broke it and gave it to them, saying, “This is my body, which is given for you. Do this in remembrance of me.” And likewise the cup after they had eaten, saying, “This cup that is poured out for you is the new covenant in my blood.”

First this, warning if you have any depth of human feeling this will tear you up:

And here is a link to the Gold Star widow’s actual phone call from President Trump
Phone call from president.
Hopefully this ends the nonsense of politicizing the death of a brave soldier.

And now in the category of barking mad comes this article about Australian feminists being triggered over a Facebook post from a woman named “Maddie” who asked how she could spice up her husband’s lunch time sandwiches on a group called “Northshore Mums”. Instead of recipe ideas what she got was outrage as various feminists upbraided her for ‘perpetuating the systemic male oppression, and lambasted her choice of lifestyle, which included packing her husband’s lunches along with her kids’.

Turns out the poor woman was a victim of the daughter of Australia’s version Gloria Steniem, a certain Polly Dunning, a loving and caring woman who wrote when she was pregnant with her son “I felt sick at the thought of something male growing inside me.”

However there is a light at the end of this tunnel as Maddie’s comments regarding the incident reveals:

She and her husband are saving up for a house, and her husband is not only the breadwinner, but helps with the kids and cooks dinner every other night. “The least I can do is make him a bloody sandwich. I love my man, he deserves to eat lunch and we can’t afford to eat out,” she said.

To which I say good for you Maddie may your tribe increase! (article source)

And that is Frenetic Friday!

How is the Word of God to be read and heard?

With diligence, preparation, and prayer; so that we may accept it with faith, store it in our hearts, and practice it in our lives.

All Scripture is breathed out by God and profitable for teaching, for reproof, for correction, and for training in righteousness, that the man of God may be complete, equipped for every good work.

Reformed Baptist|Five Solas of the Reformation|Five Petals on my Tulip|1689 London Baptist Confession my summary of theology| Plurality of Elders|Optimistic Eschatology|Covenant Theology not Dispensational|Anonymous in everything else.

Confessions of a Technophobe

"Watch your life and doctrine closely"

Strengthen the believer. Answer the critic.

Fractured Faith Blog
It Is Written

Promoting the Supremacy of Scripture

A major cinephile shares her thoughts on intriguing films.

In the Patch - Blog

A place for weary pilgrims to be encouraged in their faith

The greatest WordPress.com site in all the land!

ON THE WAY REFORMED BAPTIST CHURCH

Daily Thoughts and Meditations as we journey together with our Lord.

Confessions of a Technophobe

"Watch your life and doctrine closely"

Strengthen the believer. Answer the critic.

Fractured Faith Blog
It Is Written

Promoting the Supremacy of Scripture

A major cinephile shares her thoughts on intriguing films.

In the Patch - Blog

A place for weary pilgrims to be encouraged in their faith

The greatest WordPress.com site in all the land!

ON THE WAY REFORMED BAPTIST CHURCH

Daily Thoughts and Meditations as we journey together with our Lord.

A worship leader's missus and her views from the pew

For Baptist women of a 1689 persuasion